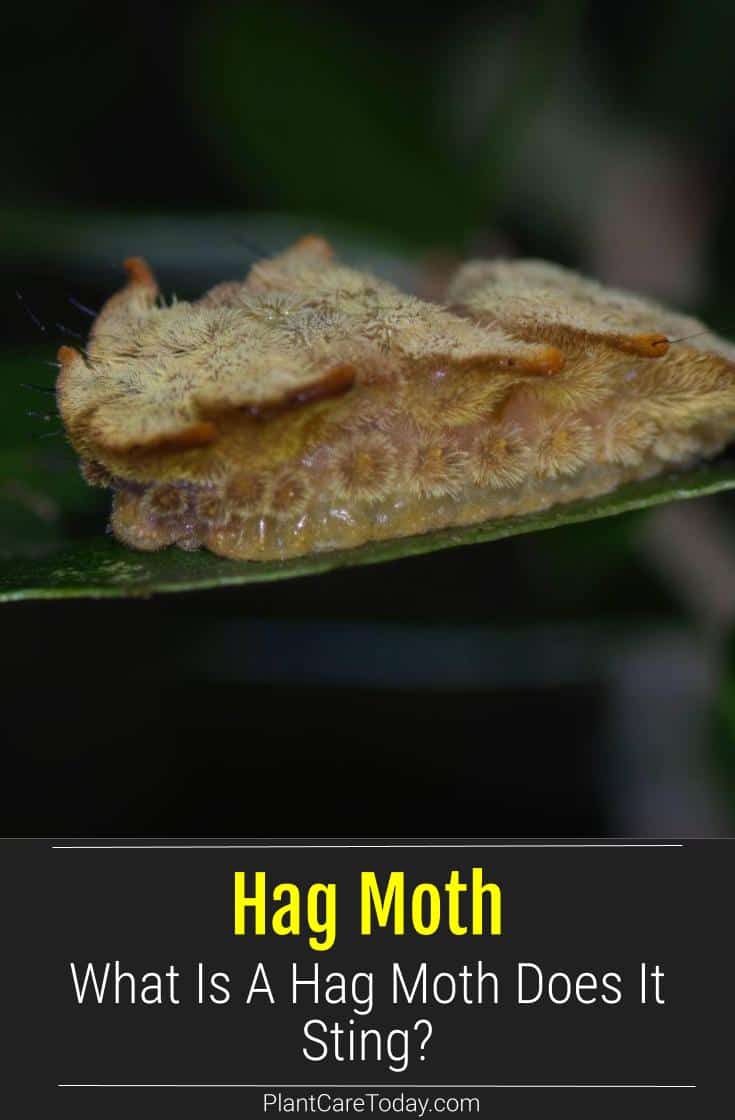 Imagine going out into your garden and seeing a weird, hairy, alien creature shaped roughly like a pile of vomit.

Before you attempt to remove it, you might be surprised to know this is an actual garden pest.

You’re seeing the larvae of a hag moth, an actual terrestrial creature that you’ll want to know more about before trying to handle.

What Is A Hag Moth? Is it Safe?

Hag moths aren’t common, despite their widespread habitats across the country. This means they’re not considered a significant pest, yet they aren’t the best thing to have in your yard.

The hag moth (Phobetron pithecium) hails from the Limacodidae family. These moths have a bizarre notion of camouflage, resulting in their unusual appearance.

Adult hag moths mimic other insects, with the males having transparent wings resembling wasps. The females are brown and grey with yellow leg stripes and fake pollen sacs to resemble bees.

The moths are solitary and only reproduce once per year throughout most of the US. Yet, two reproductive cycles per year can occur in southern states.

The larvae are where the real strangeness comes in. Often referred to as monkey slugs, these caterpillars wear a coat on their back with nine pairs of fake appendages of varying lengths.

This strange covering resembles the shell of a molted hairy spider or leaf debris.

Despite their appearance, the caterpillar’s legs are on its main body, concealed beneath its strange cloak.

Monkey slugs are small, measuring between .6″ and 1″ inches long. When attacked, the false limbs can detach, aiding the caterpillar in escape.

In addition to its six legs, the monkey slug and other larvae in the Limacodidae family have suction cups on their undersides. These suction cups allow them to move about much like a slug.

Some of the hairs on the caterpillar are hollow and can inject venom into potential attackers.

This venom isn’t dangerous to humans but can still produce annoying symptoms resembling a bee sting.

While it is more of a nuisance to most humans and pets, those with allergies to insect venom may experience more severe symptoms.

Thankfully, the adults are entirely harmless and no longer have the ability to produce venom.

How To Treat A Monkey Slug Sting?

When “stung” by a monkey slug, the treatment is the same as with bee stings.

Sometimes, hairs break off and get stuck in the skin, which you can remove using tape or tweezers. Wash the affected skin immediately, and put an ice pack on it to help prevent swelling.

Call your doctor if you have any symptoms of a histamine reaction.

Are They Harmful To Your Garden?

Thanks to their solitary nature, these moths and their larvae don’t cause much damage, although you may still want to get rid of them.

Some common targets include:

They prefer to dwell on the underside of leaves, adding yet another protection from predatory birds.

Once there, the damage is no different from other moth caterpillars – just on a much smaller scale due to their limited numbers.

Getting Rid Of Hag Moths

Despite their crazy appearance, you can get rid of hag moths and their caterpillars the same way as any other moth species.

For removing a monkey slug by hand, use thick, protective gloves or some tongs to avoid getting stung.

Next, drop them into a bucket of soapy water to kill them.

Bacillus thuringiensis (Bt for short) is another excellent option.

Bt infects caterpillars and is deadly to them but safe for use around humans and pets.

Many organic pesticides contain Bt. Spray it onto infested areas according to packaging instructions.

A third option is neem oil. Apply as either a soil soak or foliage spray.

Depending on the method, neem will either suffocate on contact or poison the caterpillar as it chews on the leaves.

Due to the strange design of the monkey slug, the foliar spray may be less effective. However, there has yet to be studied into this matter.

We recommend using the soil soak option. It’s non-toxic to humans and pets, safe for use 24 hours before harvesting produce, and ok for use on small plants and tall trees.

Please do not use neem products near natural water features that have aquatic life. They are sometimes vulnerable to neem oil.

The critical thing to remember when you see a hag moth is to avoid touching the larvae, so you don’t get stung.

Beyond that, this is one garden pest you can ignore at the cost of only a few nibbled leaves.