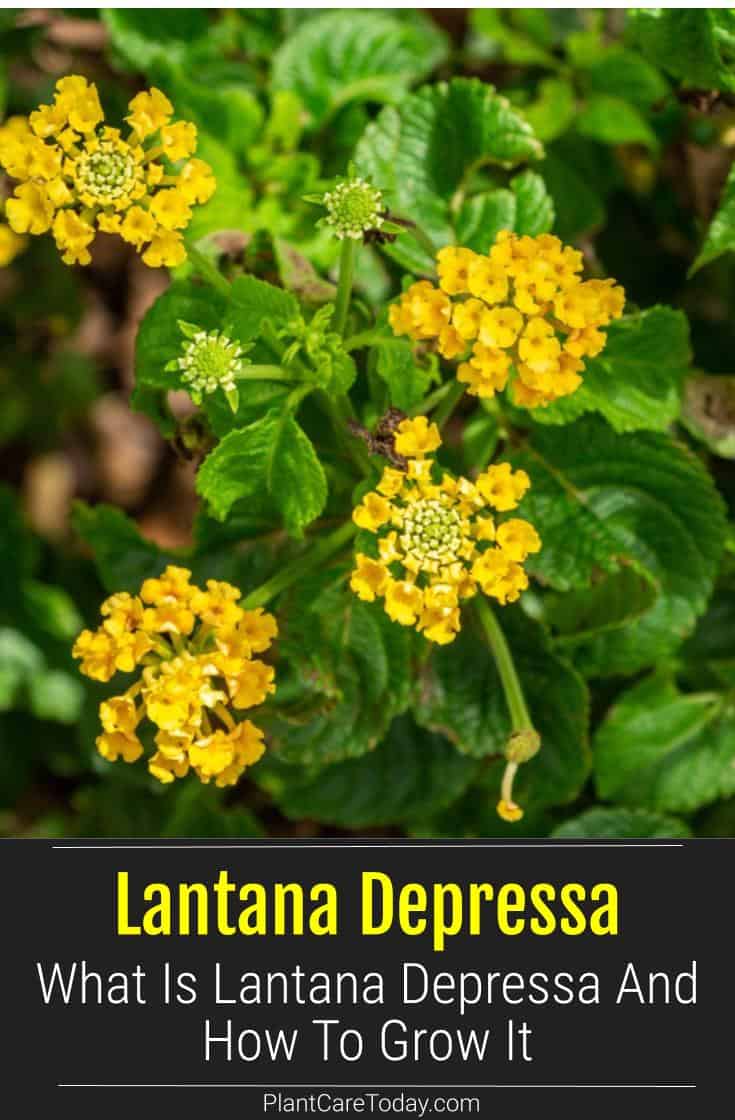 With a few exceptions, lantanas have proven to be increasingly popular in the southern states.

These perennial plants from the Verbenaceae family are often used as borders and groundcover and are well-known for their long-lasting blooms.

However, one Florida native species’s been making its own waves lately, the Lantana depressa (lan-TAN-a de-PRESS-uh).

What Is Lantana Depressa, And How to Grow It?

This lantana is native to southern Florida and is considered endangered, yet it has found a home in the nursery market.

However, hybrids of this plant are very common, most often crossed with Lantana strigocamara.

For this reason, it’s always best to buy this plant only from a reputable Florida-based seller, not big box stores, so you know you’re getting the actual plant.

They have a variety of common names, including:

Gold lantana is a smaller trailing type, measuring only 1 to 2’ feet tall with a spread of 3 to 4’ feet.

The foliage is oval to lanceolate and less showy than the invasive Lantana camara, which easily hybridizes with this plant.

However, the bright yellow flowers put most lantanas to shame, and many cultivars have been created of other species to match this color.

In some cases, the flowers may be white with a yellow center, although the blooms are not known to have a multicolor variant.

The flowers bloom for most of the year, only vanishing if the weather gets too cold. They also attract butterflies and other pollinators, adding even more beauty to your garden space.

When the flowers fade, they give way to small purple berries that are toxic to humans and pets but attractive to birds.

Despite its limited home range, gold lantana can be grown in USDA hardiness zones 8a to 11. Unfortunately, it isn’t tolerant to cold and will go dormant in cooler climates.

Gold lantana loves full sun but can also tolerate partial shade. However, it doesn’t like high humidity, which should be no higher than 50% percent.

Few plants are as forgiving as gold lantana. It can handle almost any soil condition, although it prefers sandy, well-drained soil.

Try to aim for a soil pH of 6.1 to 7.0 for the best results, although it may survive slightly outside of this range under ideal conditions.

When planting in clay soils, add an aggregate such as coarse sand or perlite.

Because lantanas can grow in poor-quality soil, feeding isn’t necessary.

However, if you wish to provide a spring boost, you can give it a dose of balanced fertilizer in the spring or add a little compost to the topsoil.

Lantana depressa can handle a bit of drought but hates soggy feet. Instead, use the finger trick to determine if it needs watering.

Simply stick your finger straight into the soil and water if it feels dry 1” to 2” inches down (approximately to the first or second knuckle).

The soak-and-dry method is best for watering gold lantana, although you can also use the bottom-up method when growing this plant in a container.

You don’t need to do a lot of maintenance with this plant.

Prune as needed to remove damaged or diseased leaves and encourage spring growth.

You may also wish to remove the berries to prevent your lantana from self-seeding, although this will mean fewer birds visiting.

Speaking of berries, you can easily propagate this lantana via seeds, as well as through division and stem cuttings.

As with all lantanas, gold lantana is quite hardy.

It has become endangered because its natural habitat happens to be the Miami area, which is now primarily an urban sprawl.

That said, the plant is resistant to drought, heat, and deer and is salt-tolerant.

It doesn’t like high humidity and may contract several fungal infections, including:

It may also attract the following pests:

Neem oil works well for treating these conditions, although lantanas are known to be sensitive to soap. Be sure to test neem products on a tiny portion of the plant to ensure the emulsion won’t cause damage.

As mentioned, lantanas are toxic to humans and pets.

The berries attract birds, and the flowers attract several pollinators.