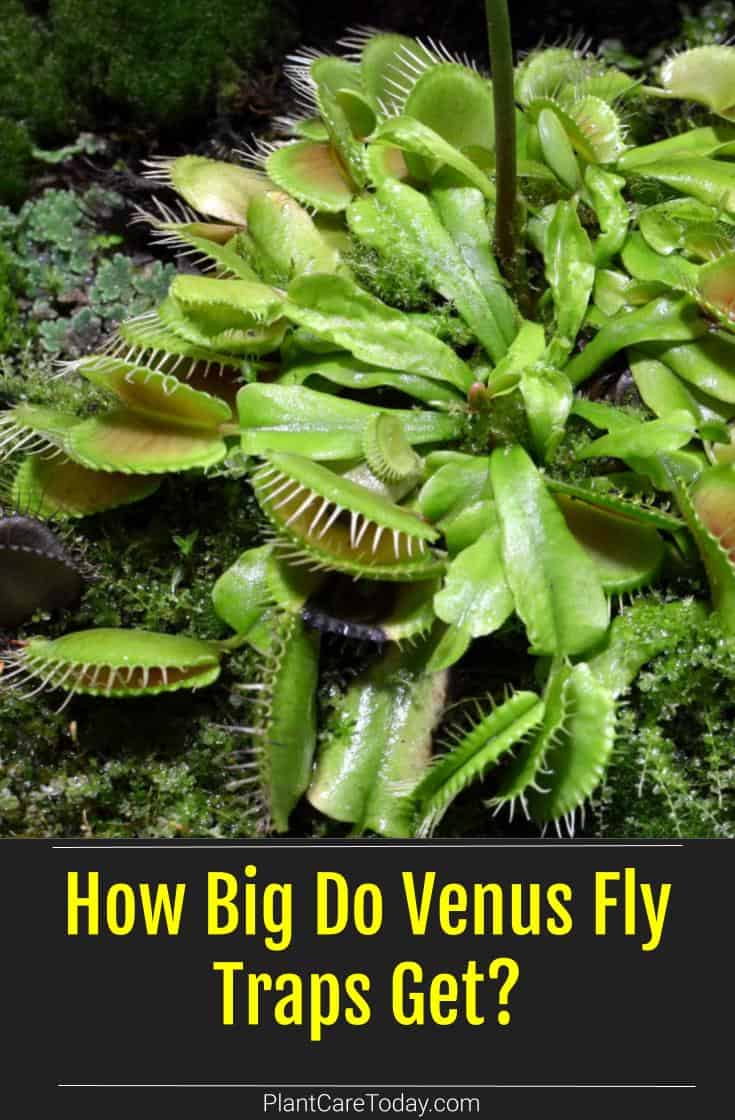 There are a lot of famous plants out there, but none are as famous (or infamous) as Audrey II. This man-eating plant captured the hearts of millions, starring in a musical and syndicated cartoon.

But what made Audrey II stand out from other alien invaders was the fact that it was based on real-life carnivorous plants.

To this day, there’s a huge market for Venus flytraps (Dionaea muscipula) due in no small part to the antics of this alien man-eater.

However, you might be disappointed (or relieved) to know that the actual Venus flytrap is quite small and will never achieve the size of Audrey II (at least, not from any cultivars developed in our lifetimes).

The Carolina natives are endangered due to a rapidly shrinking natural habitat, but plant enthusiasts ensure this monotypic (meaning only one species in its genus) thrives.

But how big do these plants get, and how do you ensure they reach the best possible size?

How Big Do Venus Fly Traps Get?

A Venus flytrap changes size many times in its lifetime, especially when flowering.

However, they generally have a spread of 5 to 6” inches and a height of up to 1’ foot.

How To Measure Your Venus Fly Trap?

When it comes to a venus flytrap, size really does matter. The specially adapted leaves must be large enough to catch and completely enclose their prey.

As a result, most carnivorous plant enthusiasts don’t measure the size of a Venus flytrap by its spread or height.

Instead, the size of the traps is what truly matters.

To measure a Venus flytrap, the trap is carefully measured according to its width at the widest point. The best way to do this is from the outside of the trap.

WARNING: If you intend to measure your own flytrap, DO NOT place your ruler or measuring tape on the inside of the maw, or you may accidentally trigger the trap to shut.

This is important because your flytrap must expend a lot of energy to trap prey, and a particular trap (i.e., the “maw” or “jaw”) will only function a few times before dying, so accidentally triggering one actually hurts your plant.

A Venus flytrap can live for up to 20 years, so you may wish to know the plant’s age if you purchase one.

Thankfully, you can judge the age of a juvenile plant based on its trap size.

At 1 to 2 years old, your Venus flytrap will require a pot diameter of about 2″ inches, and the largest traps will measure a mere ⅛” inch wide, with seedlings being anything smaller than this size.

Between 2 to 3 years, you’ll need to graduate to a 3″ inch pot, and the traps will have doubled in size to ¼” inches wide.

When the plant reaches 3 to 4 years of age, the traps will again double in size to ½” inch, and the pot will need to be anywhere from 4″ to 5″ inches wide.

Finally, the plant reaches maturity after four years, with traps measuring 1″ to 1.5″ inches for the species and as large as 2″ inches for size cultivars, with a container measuring about 6″ inches wide.

Sizes Of Some Popular Cultivars

Here are just a few of the popular ones and what their mature trap sizes are:

With a name that translates to “red dragon,” this plant shares the same size as its parent species.

However, the entire plant is a deep burgundy, making it a popular addition to carnivorous plant collections.

With a dark red trap interior, the ‘B52’ is one of the most popular flytrap cultivars out there.

Mature traps can measure slightly over 2” inches wide, allowing this plant to catch much larger prey.

This peculiar cultivar is the same size as the parent plant but has fewer teeth connected by webbing.

Despite its name, this isn’t the largest flytrap out there.

This is a cultivar very similar to ‘B52’, although the traps tend to be slightly larger, and the red is a little lighter.

However, the traps on this plant are prone to malfunctioning due to the lobes being much larger, often allowing prey to escape.

Thus, it’s possible this plant could achieve a far larger trap size if this problem were to be solved.

We can’t talk about size without giving a very special mention to Dionaea muscipula ‘Alien.’

While both ‘B52’ and ‘Ginormous’ have boasted traps over 2” inches wide, ‘Alien’ has been the only cultivar actually to hold (and break) the records.

In 2020, famed carnivorous plant breeder Jeremiah Harris earned a place in the Guinness Book of World Records for the largest confirmed flytrap, with a trap measuring 1.96” inches.

This record was set long after the aforementioned giant cultivars had already been on the market for several years and had yet to be able to prove their true potential.

Then, in 2021, Mr. Harris once again set a new world record for the largest Venus flytrap, this time with a trap measuring 2.4” inches across.

Unfortunately, whatever Jeremiah Harris is doing to achieve these record-breaking sizes is a closely guarded secret, and it’s expected he will continue to try and beat his own record.

This (officially, at least) leaves cultivars such as ‘Ginormous’ in the dust until a grower can officially prove the large sizes these cultivars are claiming to be capable of.