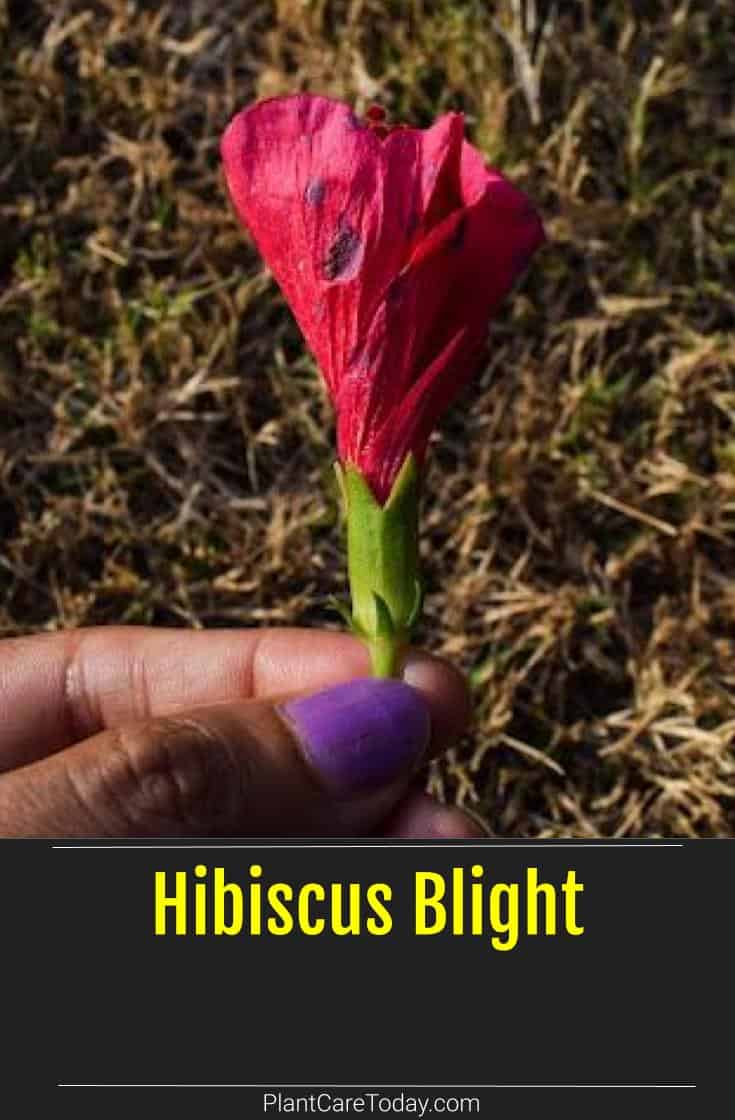 Hibiscus has become one of those major staples in gardens that serve various purposes. They attract pollinators, have beautiful towers that can be used for decoration, tea, or even eaten, and tend to be fairly hardy.

But despite these perks, hibiscus plants aren’t totally invulnerable to disease, and when one hits, it can hit hard. For this reason, gardeners often panic when they hear that hibiscus can contract blight.

While not as scary as root rot, blight is a real problem, especially when the weather has been crazy or you’ve neglected your garden.

Here’s everything you need to know about what causes blight, how to treat it, and how to prevent it in the future.

Hibiscus blights are actually a category, not a specific disease. Some forms of blight are more common than others.

First of All – Just What Is Blight?

The term blight refers specifically to a symptom of infection in which various plant tissues suffer from chlorosis, eventually becoming necrotic.

Diseases in which blight is the primary symptom are often also referred to as blight.

Diseases that cause blight are usually fungal in nature, and advanced stages of bacterial leaf spots exhibit similar symptoms.

Blights are generally named for the agent that causes them. They often begin with lesions that expand quickly, killing the surrounding tissues.

Both of these will affect leaves first but may spread to stems and flowers if untreated.

This is a particularly nasty blight caused by a fungus in the Athelia genus. The fungus itself is white and rapidly covers the surface of infected leaves and stems.

Lesions are brown to tan and often have an irregular yellow border.

Athelia spreads by entering wounds on the host plant and can affect otherwise undamaged stems by invading damaged leaves or nodes nearby.

The strain of Althelia that attacks hibiscus plants is not southern blight (Athelia rolfsii), although it has very similar symptoms.

Botrytis cinerea is one of the most infamous causes of blight disease. The disease also goes by the name gray mold and is found on grapes, strawberries, and several other plants.

Symptoms tend to begin with infected leaves looking water-soaked with sections where the tissues have collapsed.

These spots eventually develop lesions and turn to blight symptoms.

The good news is that blight is usually treatable, the only exception being blight symptoms caused by a viral infection, which cannot be cured.

The first step is to remove any infected portions of the plant.

Here’s what you need to do:

Hibiscus plants are receptive to neem oil treatments, and you can use neem soil soaks and neem foliar sprays to help fight the blight, although they won’t be enough to cure an infected plant completely.

Use the neem foliar spray to saturate the visible infection and reapply every other day for 14 days.

The neem soil soak will last up to 22 days and may be applied every 3 weeks.

Regarding fungal and bacterial infections, neem oil works best as a preventative, so be sure to use it in conjunction with other treatment methods if fighting an existing infection.

Chemical fungicides will also work against fungal forms of blight. Use the products as directed on the label.

For example, avoid overhead watering, as this can lead to moisture sitting on the leaves, which, in turn, can attract fungal spores.

Spacing your plants out with adequate airflow can also be a big help, allowing plants to dry faster after rain and reducing humidity levels.

Keep your garden free of debris and check plants regularly for signs of an infection or infestation.